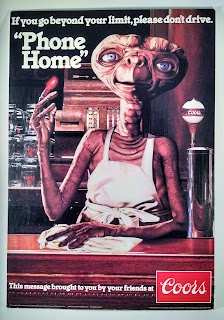 This was at the 1st table that we came across at last weekend's 40 and 8 Flea Market here in lovely Santa Rosa. It was poking out of a box of old magazines.. I love old magazine. I buy tons. It's gotten to the part where I've put an injunction on me bringing any home.. Anyhow, E.T was right there in a box of old Life magazines.

I've seen pics of this before around on the good old internet. It's wild and totally weird.  I mean, the sentiment is great and if it stopped one fool from driving drunk then good job Coors but it's a bit weird, in a good way, to partner up with a children's character. He was like the biggest thing in the world at the time so it's not a super weird decision or anything but it is notably odd, in a good way.

There is a scene in the flick were good Old E.T throws back a nice cold can of Coors so I guess it's not the strangest thing ever to partner up for some stuff but in some ways it is the weirdest thing ever. Not EVER but it is sorta strange, again, in a good way. I love this sign.

The sign is 11 by 16 inches and is made of cardboard. There is an easel like stand on the back. It's meant to be stood up on the corner of your local tavern's bar.

The sign has been on my mind lately. My man Vic Sage from over at The Retroist just wrote a very fun and informative post about it last week, seriously just last week. How weird is that? You can read his article HERE!!!!!
80's Flea Market