Paris: The Devil Made Me Do It Cassette. A Completed Quest For Beats. 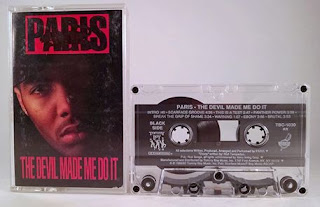 When this tape came out me and my dudes scoured the Earth to find it. I think we eventually came up on it at Amoeba Records in Berkeley. The deal was that one night I saw this video on Yo! MTV and I really thought that it was cool.

So, I really dug this tune right? but they like almost literally never played the video again, The song started to fade from my memory right? So we looked and looked for the tape at all of our regular haunts and never ever came up on it. Until we eventually did.

Here's the rub though. so I found it and when I went to play the song, it was only alright. Aint that how it always is?

The song? It was the titular track, The Devil Made Me Do it. I mean, it's ok but it's not as dope as I remember it being. In my mind it was like Public Enemy good. It's sort of PE'ish but not quite as high quality, at all. What's weird about that actually is that many years later Paris actually joined up with PE for a minute. He guested on at least one whole album.

So anyhow, I found this at the flea the other day. Brought back a ton of memories. I wonder who the other dude in town who searched near and far for this was? I'd like to have known him maybe. There wasn't a ton of underground Hip-Hop heads around Santa Rosa at the time.

Here's the song. It's pretty decent.