VHS Find: SummerSlam '91. The No Strings Attached Afternoon With The Savages Giveaway... 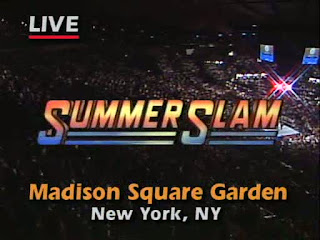 I picked up a couple of VHS tapes at The Dig yesterday. One of them said "Wrestling" so I had hopes that that one would be dope but I decided to pop in the other one first and BAM! Summerslam '91, This is the one that has the Macho Man Savage-Miss Elizabeth Wedding. That's super cool but what makes it real great is that unlike later DVD releases or whatever this is the original and it has all of the wacky commercials for WWF Contests and 900 Number type stuff.

This one here is for a contest called the No Strings Attached Giveaway where you call a 900 number and you potentially get the chance to hang out with The Macho Man and Miss.Liz for the afternoon. That would be dope right? I don't know though man, it seems fishy to me just because you can't trust wrestling and contests. It's a shady business.

My guess is that there was no afternoon with The Savages for one lucky lad. It's a weird set-up. Like, you'd call in and get to hear a message from Randy and one lucky caller get's picked. How would that even work? If there was a winner I'd bet it was picked from the mail in contestants. The whole thing seems fishy.

If there was a winner why wasn't the day shown on TV? Maybe it was and I forgot because it was a long ass time ago and I've seen decades of wrestling since... This is prolly just me being overly suspicious.

What would you do if you got to spend the day with Wrestling's Ultimate Couple? So many options.....Arcade? Batting Cages? Ice Cream at The Park? Anything would be like the greatest thing that's ever happened really. You couldn't go wrong.
90's VHS WWF