A Random Box Of Action Figures From The Dig 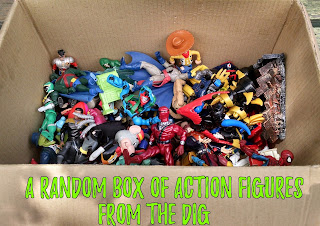 I spend a lot of time at The Goodwill Outlet store. That's where they send all of the stuff that they don't know what to do with. Stuff they tried to sell, things they don't want to sell and all sorts of random whatevers. It's the last stop before junk goes to die and I love it there. If you spend time and work hard you can unearth treasures. I don't really know if this is one of those times but I did come up on some action figures so to me, it's all good in the hood.

Here is how it works in a nutshell. Every half hour or so they take out some of the merchandise and replace it with new junk. While they bring the stuff out everyone has to wait behind a line and then the clerk gives the word and everyone runs like a maniac and grabs whatever they can. It's chaos and also totally fun.

If you want to learn more I actually recorded a whole episode of my podcast, The Toys R Us Report about it. You can find it HERE! If you so wish.It's kind of a good episode.

Anyhow, to me and to a lot of other fools who hang there Toys are the holy grail. I want em' cause I dig toys but I think dudes there are gold panning and think that there might be some nuggets in those boxes of figures. IDK,  I guess there could be but I really just want the toys for my personal collection of junk.

Whenever there is a box of toys in the new merchandise it's nothing short of a match out of the Kumite for control of it. I seldom win one of these. Some of the Dig Dregs are crazy fast. I can't keep up but this past week I actually got my hands on a whole box of action figures. It was a struggle to get it but this time your boy came out on top. Let's take a look at what was in it..

I figure that what I'm gonna do is reach in, grab one and then take a pic of it and sort of improv some comments about each figure. Let's start shall we? 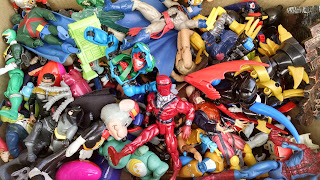 First off. That's a pic of the contents. Some of it is retro. Some not, but it's all fun right?  Ok, here we go. The first figure out of the box is.... 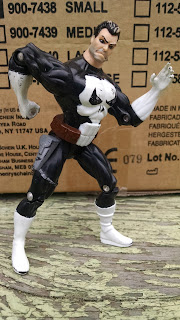 a cool Punisher! and it looks like he is about to break into the running man! I really dig The Punisher but I don't really understand his costume. I mean, what's with the gloves and the boots? Pretty weird for a dude who's super power is the power of murder. Actually, maybe it just goes to show how unhinged The Punisher really is.. Who knows..

This is a pretty nice figure. He has a ton of articulation and his hands is stuck in the HEAVY METAL! SATAN! Symbol. That's undoubtedly dope. It looks right here like Spidey is giving The Dark Lord a big bow-wow. Nice figure overall. 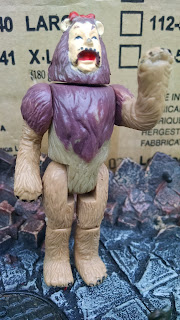 Up next, The Cowardly Lion from The Wizard Of Oz. I really don't recall this toy line. It's a nice likeness though. It does look just like him. Oh ya, I found that base that he is standing on in the box. Now it looks like he is standing on the street but in front of a giant cardboard wall. 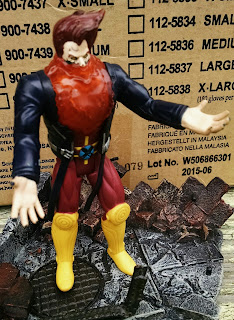 Who the heck is this? I'm a big comic nerd but not a big X-Men dude. I really have NO IDEA who this is. Don't feel like you have to rush out and tell me. I'm fine not knowing. I do like his beard though. It looks like he threw up lava. That would be an awful mutant power. 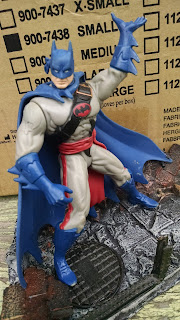 What's the deal with this Swashbuckling Batman? It must be some sort of Elseworlds tale. Some of those are great. Some not so great. I wonder where Pirate Batman fits in? It could be good but IDK, it could also be awful. I'm leaning toward awful but you never know. 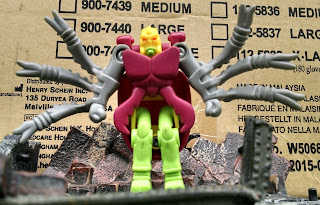 I like this one too. He's a Transformer, I guess. He starts off as some sort of hideous insect and then he becomes the robot that you see up there. Lets take a quick peek at what he looks like in insect mode. 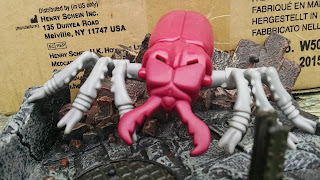 Hideous! Bugs are gross. I do dig his pincers but IDK, I'm underwhelmed really. I'm not mad though. it could be worse. He could have transformed into a fly or something lame/gross like that.. 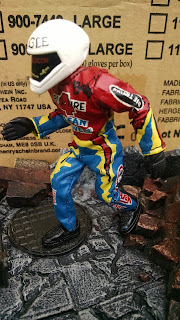 I'm not sure where this one is from. He's obviously some sort of X-Games athlete. He's pretty neat. His jumpsuit is made of fabric which is always fun and he has a ton of articulation plus some sort of magnets on his feet. That's a fun feature. I could stick him on the fridge if I wanted to. I think I do want to. Hold on.....

Well, I tried, they weren't strong enough. He fell to his death and then rolled under the fridge where he will stay until, well, maybe forever.. 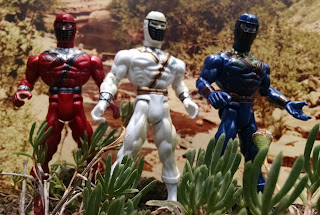 And finally.... what to me was the best of the best, these 3 Ninjas. I went back in the house and got my desert backdrop for the photo shoot. After I did it I was all like, what are Ninjas doing in the desert? Vacation? IDK? They have as much right to go there as anyone I suppose.

What I dug about these dudes was there Red, White and Blue Motif. When I saw them my first thought was, All American Ninjas! How Rad! When I said that to my Old Lady she responded with "Maybe they are French" and then my daughter 2.0 said "Or Puerto Rican" Well, there you go, another Patriotic Dream dashed by knowledge of flags..

They still rule irregardless of national origin and I really hope they enjoyed their trip to The Desert. It looks like fun.

Those Ice Plants are huge.
The Dig Toys