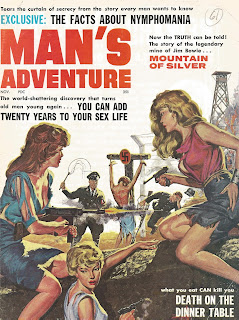 This is another cool thing I found while digging through my papers. It's not the whole magazine mind you, just the cover. I think that's enough but I would like the rest of the mag, if you happen to have it lying around send it over to your boy. He's interested.

This is super interesting to me though. It has Nazis, chicks shooting Nazis (That's dope) an article about Nymphomania and a bunch of other pulpy type stuff. Magazines used to be so cool.  I got a couple of magazines in the mail today, one of them had tips to sustain your marriage spark and the other one had low-fat recipes. Neither one was for me mind you but nevertheless, they seem lame.

I like how the Ratzis have The Swastika on their torture pole. Those guys were great with their branding. I think that's why they are still so popular today. That and the fact that a lot of people are super gross and stupid.

This mag came out November of 1961.. They really knew how to make a cover back then. The two mags we got earlier had some celeb that I wasn't familiar with and the other one had a pic of a bowl of leaves with like other leafy greens on top of them. I dig it, you have to sell to your audience but man, it's super boring. Even the gals who get it have to think that. They do right?
Flea Market Magazine Scans Scans